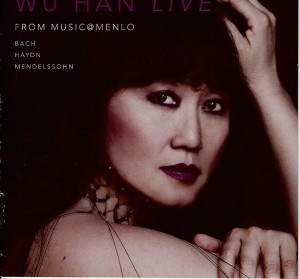 Pianist Wu Han’s newest CD, Wu Han Live, puts her remarkable artistry and versatility on full display, and the album shows she is equally at home with baroque as she is with romantic music. Time and again Wu Han has proved she is one of today’s finest interpreters, and this new release reaffirms her position.

The four works on the album make a wonderful collection and lets her shine as a soloist as well as a collaborator.

In the opening work, J.S. Bach’s French Suite No. 5, BWV 816, Wu Han gives a fabulously articulated account that is notable for its clean phrasings and remarkably nuanced use of dynamics and touch. Her finely honed expressions bring depth to her playing. It’s not an easy task playing baroque keyboard music on a modern grand piano, but in her hands the suite sounds as if Bach had conceived it for a 9-foot concert grand.

The other early work on this disc is Haydn’s Keyboard Concertino in C major, written in 1760, making it one of his earliest compositions. For this brief work, Wu Han is joined by some of her Music@Menlo colleagues: violinists Erin Keefe and Jorja Fleezanis and cellist David Finckel. There is a wonderfully crafted balance between Wu Han and the ensemble and their playing is tight and on the mark.

The rest of the CD is devoted to Mendelssohn.

Wu Han has chosen a short set of four Songs Without Words from op. 62 and 67 for this disc, which she plays with beautifully fluid lyricism that captures the exuberant romanticism of the music. These delightful vignettes are gorgeously expressed and bring out the vocal characteristics of each.

The other Mendelssohn is his Double Concerto in D minor for Violin, Piano and Strings, written when the composer was just 14 years old. It’s a marvelous blend of baroque and romantic stylistic elements; a finely crafted piece, these divergent influences are well integrated into the overall musical fabric.

Wu Han and solo violinist Benjamin Beilman, together with their musical partners — violinists Kristin Lee and Sunmi Chang, violist Richard O’Neill, cellist Dmitri Atapine and bassist Scott Pingel — bring out the romantic passion and the somewhat dark mood of the work with their solidly crafted and wonderfully executed reading. The music is powerfully expressed and yet underscores the youthful vigor and sweet lyricism that is Mendelssohn’s trademark.

Wu Han Live is a captivating album and deserves a special place in any music lover’s collection.

Although there were other composers in the early 1960s exploring what would later be termed minimalism, Terry Riley has come to be known as the grandfather of the genre. And truth be known, Riley is certainly the spiritual guide for later minimalists such as Steve Reich, Philip Glass and John Adams.

Riley’s seminal In C is a masterpiece and still one of the most profound works of minimalism. Lesser known, but equally important, is his Dorian Reeds, written around the same time as In C.

Until now, there have only been two recordings of Dorian Reeds, the first by Riley in 1967, and the second some 40 years later by Ulrich Krieger. Now, Utah musician Matt Starling (formerly Matt Dixon), a regular contributor to Reichel Recommends, has finished his recording of the piece and added a twist to it in the process.

The two earlier versions were played on saxophone, but Starling, a brass player, has changed things up a bit and recorded it on flugelhorn. It works remarkably well for a brass instrument. And thanks to Starling’s virtuosic playing and technical wizardry it’s a powerful realization that still has a lot to offer listeners in general and Riley fans in particular.

Unlike In C, which is based on a lengthy set of notes and motivic fragments played repeatedly by an unspecified number of instruments, Dorian Reeds employs a tape loop which is activated once the player starts. The effect is much the same as In C, but it’s a more sophisticated approach.

Starling takes the old analog tape technology and adds today’s computer technology to recreate the work and make it modern and new. For anyone who knows Riley’s original recording this makes the piece sound fresh, vibrant and exciting.

This is a powerful recording that underscores the immediacy of the work, its driving passion, relentless energy and hypnotic charm. It captures the infinite vastness that this piece conjures up.

It’s obvious that Starling has an affinity for Riley (he has also recorded In C with his Salt Lake Electric Ensemble) and this affinity comes through in this performance. It’s an important addition to the Riley discography.

Dorian Reeds is scheduled to be released on March 22. CDs can be ordered at mattstarling.bandcamp.com and Amazon.com. Digital downloads will be available at all major outlets including Bandcamp, iTunes, Amazon mp3, eMusic and Google Play.