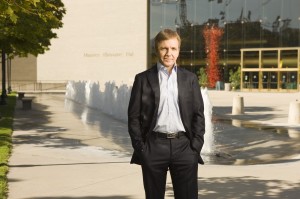 Fischer, together with symphony president and CEO Melia Tourangeau and board chair Dave Petersen, revealed the Utah Symphony’s 2015-16 season Monday at a news conference held at the Salt Lake Tabernacle.

“This is going to be a festive season with many big projects,” Fischer said. “This anniversary can only be served by going for big.”

Tourangeau said that the upcoming season took a long time to plan and finalize. “It was in the making for 18 months. We didn’t just want to celebrate the symphony, but Utah.”

However, the focus will be squarely on the Utah Symphony. “We are showcasing the orchestra and the community, and all that is good about the people here,” Tourangeau said.

Petersen added that the orchestra is an arts icon that represents the entire state, not just Salt Lake City. “This is Utah’s symphony. It belongs to all of Utah.”

It’s a concept that Fischer agrees with. To symbolize that he wanted the symphony’s 75th anniversary season to embrace the other major performing organizations in the state. “I wanted to celebrate in collaboration, because this is about all of us,” he said.

There will be six major collaborations in the masterworks series in the new season: 1) Mormon Tabernacle Choir in Mahler’s Symphony No. 8 (Feb. 19-20, 2016, in the Salt Lake Tabernacle, part of the O.C. Tanner Gift of Music series; the performances will also be recorded for future release); 2) Utah Opera in a semi-staged production of Ravel’s comic one-act opera L’enfant et les sortiléges (Nov. 13-14 in Abravanel Hall); 3) Utah Symphony Chorus in several works on separate programs during the season; 4) Madeleine Choir School in Holst’s The Planets on April 8-9, 2016, with guest conductor Hans Graf, and in Mahler’s Eighth Symphony; 5) Utah Shakespeare Festival in Prokofiev’s ballet Romeo and Juliet (April 15-16, 2016); and 6) Ballet West in a newly commissioned choreography of Debussy’s ballet Jeux ( (Feb. 26-27, 2016).

The new season will also see Fischer and the orchestra traveling to New York City. This will be the first time the ensemble has played in the Big Apple since 1975. They’ll perform in Carnegie Hall on April 29, 2016. On the program will be works by Haydn, Bartók and Richard Strauss. They will also give the New York premiere of Andrew Norman’s new Concerto for Percussion, which will receive its world premiere performance in Abravanel Hall on Nov. 6-7.

The orchestra has also commissioned a new work from Nico Muhly which will be premiered on Dec. 4-5. Both this and the Norman concerto will be recorded for future commercial release.

There will be a gala concert on Oct. 1 with piano superstar Lang Lang playing two works: Mozart’s C Minor Concerto, K. 491, and Grieg’s Concerto in A minor. “Proceeds from the gala will help support the tour to Carnegie Hall,” Tourangeau said.

In between comments from the three symphony representatives, there were also musical interludes featuring the symphony’s brass section and principal timpanist George Brown; soprano Celena Shafer; and the Madeleine Choir School.

Holding the news conference in the Salt Lake Tabernacle was symbolic, Tourangeau said. “This is a landmark. This is where the Utah Symphony played for over 40 years and where the symphony and Maurice Abravanel recorded over one hundred albums.”

For a complete listing of concerts for the 2015-16 season log on to www.utahsymphony.org/15-16-season.