Wednesday’s opening night performance of Brigham Young University’s production of Mozart’s The Marriage of Figaro was Rebecca Pedersen’s show. The young soprano dominated the proceedings as the Countess not only with her singing but also with her regal stage presence. She brought depth to her characterization through her fine acting and vocal chops. 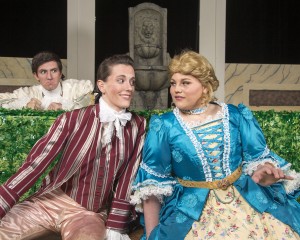 Pedersen, a senior at BYU and a recent winner of the Metropolitan Opera National Council Auditions, already has star qualities that come through no matter what she sings or where she sings. Her performance Wednesday, which she repeats Friday, is perhaps her best to date. She infused her portrayal with wonderfully crafted nuances both in her acting and singing. There was real pathos in her two big arias, “Porgi amor” and “Dove sono;” her emotions were heartfelt and genuine.

Beverly Thompson was also noteworthy as Susanna. Her portrayal as Figaro’s betrothed was effervescent and bright. Her singing was nicely crafted and although she started out a bit shakily her performance got stronger as the evening wore on.

As Cherubino, the love sick page to the Count, Annie Powell also improved during the performance. Her acting was top notch and she did a credible job with her two arias, “Non so più” and “Voi che sapete.”

Tyrell Wilde, in the title role, was strong and focused. His portrayal was well rounded and his singing was exceptional; and he held his own in ensembles with Pedersen.

Andrew Neumayer was commanding as the Count. He has a finely modulated and rounded voice that was well suited for his role. He, too, was quite convincing and he did a wonderful job with his major aria, “Hai già vinta la causa.”

The Wednesday cast, by and large, was well chosen. In smaller roles, Lennika Wright as Marcellina and Kevin Smith as Bartolo were a delight. They imbued their roles with wit and humor.

The chorus was also quite good, and the BYU Chamber Orchestra, despite a few hiccups, played well. Conductor Kory Katseanes’ tempos were well chosen and kept things flowing nicely and seamlessly. The sets were true to the period (late 18th century) and marvelous, and Lawrence Vincent’s staging was wonderfully conceived and executed.