The string quartet field has become crowded in the last 10-12 years with a slew of young groups trying to carve out an international career. Yet there always seems to be room for one more. One of these ensembles that has been making a name for itself is the Bennewitz Quartet from the Czech Republic. They’ve enjoyed considerable success in Europe and are trying to establish their reputation now in the United States. 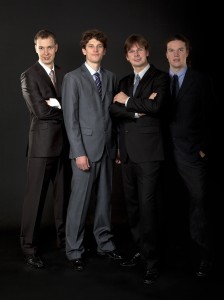 The group made its Utah debut Wednesday to close out the Chamber Music Society of Salt Lake City’s season. They played an ambitious program of Ravel, Martinu and Schumann that spotlighted their interpretative, musical and technical skills and showed that they are a group with considerable merit.

The foursome opened with Ravel’s sole quartet. Probably one of his best known and most frequently played works, the music exudes sensuality and rich imagery. They captured that with their unhurried and rather understated reading. And while there were some well played moments – particularly in the second movement – the piece could have benefited from a more demonstrative interpretation.

It was in the other two works that the Bennewitz clearly showed what it was capable of.

The music of Czech composer Martinu isn’t well known in the United States, which is unfortunate because he writes with a unique voice that isn’t easily imitated. There is a rough hewn quality to most of his works that is refreshingly original and fascinating.

The Bennewitz played Martinu’s Third Quartet from 1928. They did a fabulous job in bringing out the untamed vibrancy of the music. Their account was imbued with passion and wonderful expressiveness that smoothed out the rougher edges without compromising the striking character of the three-movement work.

After intermission the group played the last of Schumann’s three quartets (op. 41, no. 3, in A major).  A work of exhilarating romantic emotions, the foursome gave a lushly passionate account that never crossed into sentimentality. It was a beautifully nuanced performance with well crafted phrasings and delicately defined lyricism.

As an encore, the Bennewitz played the Cavatina movement from Beethoven’s B flat major Quartet, op. 130. Their playing was eloquent and underscored the heartfelt tenderness of the music.