Robert Breault obviously believes that raising the bar on artistic standards is the way for young singers to realize their potential. And that has definitely been paying dividends. Every year Breault’s University of Utah Lyric Opera Ensemble has some of the best young talent in the state, and it seems every year the caliber of performances gets better. Breault has always had some strong singing and acting talent, but, quite frankly, the current ensemble has outdone itself with this year’s production of Giuseppe Verdi’s Falstaff.

Falstaff is not an opera one expects to find at a university opera program. It’s a very demanding work with a complex score. And even though the character of Sir John Falstaff is central to the story, the opera is an ensemble piece and requires an exceptional cast right down to the smallest roles to pull it off. And Breault certainly has the singers to do justice to this captivating work. 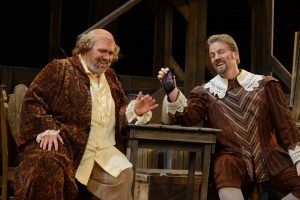 Reichel Recommends attended Thursday’s dress rehearsal, which has the same cast that will sing at Saturday’s performance. These singers brought a freshness to the performance that was remarkable and made it feel as if one were seeing Falstaff for the first time.

Guest artist Steven Condy joins the Lyric Opera Ensemble as Falstaff, a role he sang with Utah Opera two years ago. Condy has made the role his own; he easily captures the larger than life character of the scheming knight who, in the end, can laugh at his foibles. At Thursday’s dress rehearsal, Condy sang with vigor and depth and imbued his portrayal with finely nuanced inflections both in his singing and his acting. It was quite a memorable performance.

Custodio has a warm soprano that is wonderfully lyrical and rich with expression. Her acting brought depth and conviction to her portrayal and underscored Alice’s strong nature.

Windt has a gorgeously lyrical voice that blended well with the others. She also brought definition and articulation to her role.

Peterson stood out with her wonderfully rich and vibrant voice. She was a delight as the scheming Mistress Quickly. 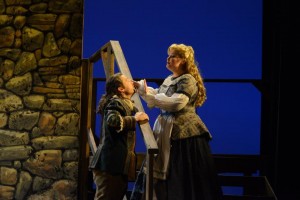 As the young Nannetta, Melissa Heath absolutely sparkled. Heath brought a youthful enthusiasm to her character that was infectious. Her light and wonderfully modulated voice suited her character well and she sang superbly. Particularly striking was her Fairy Song in Act III.

The men were just as noteworthy. Tyler Oliphant brought a richness of characterization to his portrayal of Ford. His commanding baritone was impressive, and he was Condy’s equal in their lengthy duet in Act II.

Lucas Goodrich as Fenton, Nannetta’s love interest, was wonderful. Goodrich has a clear, vibrant tenor, and he and Heath were well paired as the young lovers.

Elijah Hancock and Matthew Castleton were in top form as Falstaff’s servants Bardolfo and Pistola, respectively. Their acting and singing were excellent and they made the most out of their bumbling characters.

Michael Scarola is once again stage director. This is his fourth production with the Lyric Opera Ensemble, and once again he brought his A game with him. His pacing and timing are on the mark. There are no slow moments, everything flows nicely and smoothly. And Scarola allows the humor that is inherent in Arrigo Boïto’s libretto to stand on its own, considerable, merits.

Conductor Robert Baldwin’s tempos are well chosen and the Utah Philharmonia played with self assurance and conviction.

This is definitely a production that is well worth any opera lover’s time.