It takes a special kind of pianist to play Chopin’s music well. Among the younger generation of pianists, Vassily Primakov is one such performer. He has what it takes to capture the essence of the music. 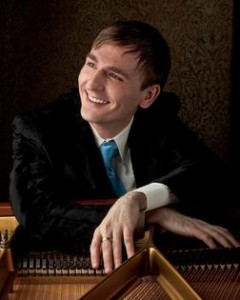 The 34-year-old pianist possesses remarkable technique. He plays with dexterity and seamless lines. He brings virtuosity to a new level, but he never lets that get in the way of the music. He has a large palette of expressions at his disposal and his sense of rubato is impressive. He is a real poet of the piano – and when it comes to Chopin that is essential.

The Moscow native has played in Salt Lake City a few times since winning the silver medal and the Audience Prize at the 2002 Gina Bachauer International Artists Piano Competition. He was in town again last week as part of the Bachauer Piano Festival and played a stunning all-Chopin recital Friday evening.

His discerning musical taste manifested itself immediately in the opening work, the Sonata No. 1 in C minor. Primakov brought a rounded and well modulated tone to his playing. His account was rather subdued but nevertheless full of passion and expression.

He brought the same exquisite pianism to the subsequent Nocturne in F major, op. 15, no. 1, and the Waltz in A minor, op. 34, no. 2. Both were played with feeling, expression and great sensitivity.

Primakov rounded out the first half of his program with a robust account of the Polonaise in C sharp minor, op. 26, no. 1, and an assertive yet poignant reading of the Ballade No. 2.

The second half opened with the Scherzo No. 3 in C sharp minor, op. 39. Primakov played it with well delineated phrases and clean execution.

Three of the four op. 41 Mazurkas (C sharp minor, E minor and B major) followed next. Primakov’s interpretations of these pieces were heartfelt, emotionally charged and poignant.

The program ended with the Ballades Nos. 3 and 4 and a subtle account of the Fantasie in F minor, op. 49.