Many members of the Utah Symphony leave the Beehive State during the summer to take part in festivals around the country. One of them is David Park, the symphony’s assistant concertmaster. 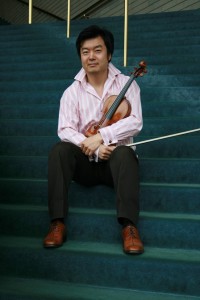 Park will be sharing concertmaster duties at Virginia’s Blue Ridge Music Festival, which kicks off  its inaugural season May 30. “Being part of this new festival is quite an honor for me,” Park told Reichel Recommends. Park was invited to be part of the festival by its founder, conductor David Stewart Wiley, whom he has known for a number of years. “David and I have developed a good rapport,” Park said.

The musicians participating at the festival come from all over the United States. In addition to playing in the orchestra and doing chamber concerts, most of them will also be teaching and coaching at the festival’s academy.  “These are college aged, advanced students,” Park said. “We’re going to be mentoring them and they will be playing concerts with us in the orchestra.” The students will also give solo recitals and play chamber music. “This is a great experience for them, and I’m looking forward to working with these talented young people.”

Park said the festival has everything it needs to be successful. “I think the audience will be in for a surprise. It’s in a beautiful mountain setting, and there will be some beautiful music played by top flight musicians and very talented students. It should be an enjoyable experience for everyone.”

The festival runs through June 9. For more information log on to www.virginiasblueridgefestival.org.

(Park talks about his violin, a 19th century Guadagnini, in the current issue of Strings magazine. Click here to read the story.)