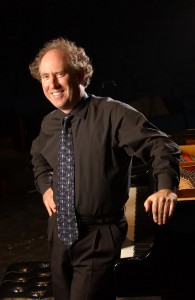 The Virtuoso Series started its season Tuesday evening with a stunning recital by pianist Jeffrey Kahane.

In the past Kahane has appeared in Utah as both conductor and pianist, but Tuesday’s concert was the first recital the 56-year-old Los Angeles native has played here. And what a recital – Kahane presented a wonderfully wide ranging program that also included a piece by his son, Gabriel Kahane.

Gabriel Kahane’s Django (Tiny Variations on a Big Dog) was written at his father’s request and premiered by him in New York in 2009. It’s a clever set of variations that are rhythmically challenging and at times harmonically complex. Jeffrey Kahane gave a stand out reading that made short work of the virtuosic writing.

The recital opened with J.S. Bach’s French Suite No. 5 in G major, BWV 816. Not all pianists can do justice to Bach’s music that was originally written for harpsichord, but Kahane knows what to do with these magnificent keyboard works. He played the Suite with precision, clarity and cleanly defined phrases. And he also infused his reading with delicately crafted lyricism throughout.

The Bach was paired in the first half with Robert Schumann’s Fantasy in C major, op. 17. A master of the keyboard – as was Bach – Schumann wrote some of the most remarkable works for the piano to come out of the 19th century. But as charged as his works are with romantic sentiment, they are never overbearing. And that is how Kahane approached the Fantasy. His playing was effusive, full of passion and emotional, yet never excessive. And, in fact, Kahane brought a good deal of poetic lyricism and subtlety to his account.

The second half of the program focused on shorter pieces. After Gabriel Kahane’s set of variations, there was another piece by him, a song transcribed for piano by his father, that served as an introduction to the closing section.

The song “Where are the arms” is an expressive little piece that is almost hymn-like in character. Jeffrey Kahane played it with feeling and sincerity.

This was followed by Schumann’s song “Widmung” and Felix Mendelssohn’s Song without Words in A flat, both in transcriptions by Franz Liszt and both played with fluid lyricism and well defined expressiveness.

After Frédéric Chopin’s Barcarolle in F sharp major, op. 60, which Kahane played with sensitivity, the program ended with two pieces by Spanish composers: Isaac Albéniz’s “Evocacion” from Iberia, Book One, and Enrique Granados’ “Los Requiebros” from Goyescas. Kahane played the former with beautifully crafted phrasings and articulate expressiveness, while the latter was given an ebullient and virtuosic treatment.