Carl Nielsen’s Symphony No. 3, Sinfonia espansiva, which Thierry Fischer and the Utah Symphony are playing this weekend, is unusual in the Danish composer’s output since it incorporates two vocalists into the orchestral fabric in the second movement. 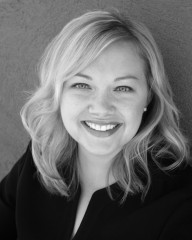 One of the singers is soprano Melissa Heath, for whom this work is a departure from her normal repertoire. “It’s certainly different than art song or opera, because you have to create an interpretation,” she said in an interview with Reichel Recommends. “In opera you have costumes and texts and everything is scripted. In the Nielsen we just sing a vocalise.” Heath said that the manner in which Nielsen uses the voices is “organic” because of how he integrates the voices and orchestra. “The voices come out of the orchestra and weave in and out. They add color that the instruments can’t.”

She’s looking forward to it. “This is the first time I’m doing this symphony and it’s the first time I’m singing with the Utah Symphony,” Heath said. “I’m thrilled to have the opportunity to work with Thierry Fischer. He is a conductor who knows what he wants.”

Fischer wants Heath and her vocal partner, baritone Shea Owens, situated somewhere in Abravanel Hall and not onstage. When Reichel Recommends spoke with Heath she said Fischer hadn’t decided where the two singers should be. “He wants to experiment with spaces,” she said. “We might be in the balcony or somewhere else in the hall.”

Heath is part of the opera program at the University of Utah where she is a student of Robert Breault. She is currently working on her doctorate, which she will receive next May. In addition to her studies, the young singer keeps herself quite busy as a performer. Besides doctoral recitals, she will be singing Micaëla in an upcoming concert performance of  Bizet’s Carmen in San Francisco. Closer to home, she’ll sing the Countess in a concert version of Mozart’s Le nozze di Figaro with the Utah Lyric Opera Ensemble and the Paradigm Chamber Orchestra under Joel Rosenberg next February. Also in February she will be in a performance of Mendelssohn’s oratorio Elijah with the Utah Valley Symphony under Reed Criddle. And in March she will sing Vaughan Williams’ Dona nobis pacem with the Temple Square Chorale and the Orchestra at Temple Square.

“I love it,” she said. “I love Salt Lake City for all these opportunities to perform.”

After she receives her doctor of musical arts degree, Heath hopes to be able to combine performing and teaching. “I love the academic side. I hope to get a university position somewhere.” Performing and teaching go hand in hand, she said. “As a singer you have to know how to interpret, and that’s something I want to convey to my students.”

She admitted that when it comes to other singers, she is definitely old school. “My two favorite sopranos are Beverly Sills and Anna Moffo.” Among younger singers she enjoys listening to is another Utahn, Erin Palmer Morley. “I love her sound. It isn’t forced or super loud. I’m a big advocate for creating lovely sounds.”

Also on this weekend’s program is Beethoven’s Piano Concerto No. 3 with soloist Ronald Brautigam; Haydn’s Symphony No. 4 in D major; and Mozart’s overture to Die Zauberflöte.