The Utah Symphony hardly ever programs works written in the last 50 years or so, unless they are “accessible” – a trite catchword for contemporary lightweight ear candy.

But thanks to Thierry Fischer things have slowly changed. He’s taken the initiative and introduced works that don’t necessarily have broad appeal.

This weekend, Fischer and the symphony are playing a work by one of the 20th century’s leading composers, the Concerto for Double Bass by the German Hans Werner Henze. Soloist is the orchestra’s principal bass David Yavornitzky, who is celebrating his 25thanniversary with the ensemble. 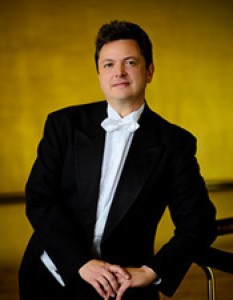 Henze, who passed away late last year at the age of 86, wrote the concerto in 1966. He wisely scored it for a small ensemble since the double bass is easily overpowered by other instruments. It’s a rather traditional work; harmonically and melodically, the concerto isn’t particularly modern or dissonant; it has tonal centers and is fairly mild.

Of the three movements the last, marked “Ciacona,” is the most interesting because of the intricate interplay between soloist and orchestra and because of the clever orchestration that creates some wonderful timbral colors.

The concerto is certainly a challenging work for the ensemble and soloist. And both acquitted themselves fabulously; they made the demands Henze places on them seem easy. The orchestra played with cleanly defined articulation and crisp execution, as well as with nuanced expressiveness. And Yavornitzky executed his part with polish and wonderful musicality. It was a seamless collaboration overseen by Fischer’s perceptive direction.

The technical demands of the solo part are nicely integrated into the overall musical fabric, and Yavornitzky displayed his considerable artistry as he wended his way through the work. His account was sensitive and nuanced, passionate and dynamic.

On either side of Henze’s concerto were two symphonies by Felix Mendelssohn, the First and Fifth (Reformation).

Fischer elicited a commanding and articulate account of both works that kept the classical structure intact.  The symphony’s playing was precise and well executed. Fischer’s interpretation captured the drama and restless energy as well as the charming lyricism of both. It was transparent and clean and underscored the youthful vigor and energy that courses through so much of Mendelssohn’s music.