When Ralph Woodward decided to start a children’s choir it was because of his desire to teach youngsters proper vocal technique. That was in 1979. Thirty-three years later he is still doing what he believes in. And hundreds upon hundreds of children have benefited from his direction and mentoring. So has the community. Each year Woodward’s Salt Lake Children’s Choir presents two concerts, of which the Christmas concert is a special treat and a highlight of the season. 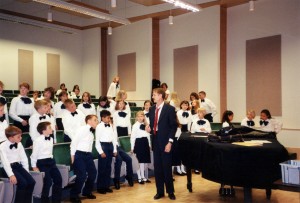 The holiday concerts are fast approaching. As in the past there will be two performances. This year they take place on Friday and Sunday (there will be no performance on Saturday). Both begin at 8 p.m. in the Cathedral of the Madeleine, the choir’s winter venue since 1984.

On the program will be music by Palestrina, Bach and Vivaldi, as well as works by Pavel Chesnokov and Utah composer Vanja Watkins. There will also be some of Woodward’s own pieces along with perennial favorites such as “Lo, How a Rose E’er Blooming” and the ever popular audience sing along, where former choir members join current choristers onstage. Accompanying the choir will be harpist Lysa Rytting and organist Ken Udy.

Back in 1979, when Woodward founded the Salt Lake Children’s Choir – which he originally called The Wasatch Children – there was no formally organized children’s choir in Utah. “There were some informal groups that were pop oriented, but I didn’t know of any formal groups,” he said in an interview with Reichel Recommends. And that gave him the incentive he needed to start his own ensemble. “I felt I wanted to provide an alternative to that (pop oriented choirs).”

Woodward wasn’t a complete novice when it came to choirs, because he had some experience conducting local church choirs. “I’d been invited to conduct some of these choirs and I got the idea to augment them with some children in the ward.” From there it was only logical to take it to the next level. “I thought, ‘Why don’t I do what I really want to do?’” And what he wanted was to direct a children’s choir. “I already had repertoire that was appropriate for kids, and I knew a few things about how to help children sing,” he said. He also had the necessary background. “I taught briefly in public school and had organized a couple of choirs. I was also aware of children’s choirs from around the world. And my experience showed me that children anywhere can be taught to sing. You don’t have to be in Vienna, or somewhere else in Europe.” 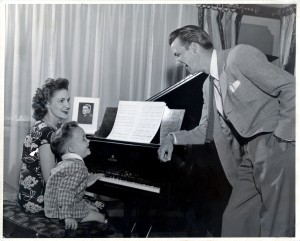 Woodward grew up with choral music. Both of his parents were voice teachers at Brigham Young University and both were his first and most important mentors. “My mother was a wonderful singer who had her own studio,” he said. “She had a special way to help people who thought they couldn’t sing.”

In 1955 Woodward’s father joined BYU, where he became director of choral activities and helped develop the school’s choral program. “He started the Schola Cantorum and the Men’s Chorus and took over the A Cappella Choir,” Woodward said. “The A Cappella Choir was BYU’s flagship group.” Under Woodward’s dad, the choir had the distinction of being the first non-Catholic ensemble to sing at Notre Dame Cathedral in Paris. It also participated in and took top honors at the International Eisteddfod Competition in Wales.

With this kind of choral background, it should have been a given that Woodward would follow his parents’ footsteps and be involved in choral music. But as it turned out, Woodward came to choral music in a rather roundabout fashion.

Although he could sing before he could talk, Woodward took up the French horn after dropping the violin. “I quit violin lessons when I was 12 because I thought it was unmanly,” he admitted. He played horn throughout high school and was good enough to get a scholarship to the University of Illinois. After college Woodward went to Europe to improve his technique and ended up studying with renowned horn virtuoso Hermann Baumann, with whom he became close friends. 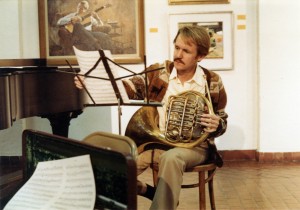 In Europe, Woodward auditioned for several orchestras in Germany. He played third horn in an orchestra in Wuppertal; he was acting principal with the Rheinische Philharmonie; and he played natural horn in a recording by Frans Brüggen of Mozart flute concertos. “I had a lot of good experiences and I was invited to audition in Berlin and other cities,” he said. “But I didn’t want to stay in Europe any longer; I was ready to return to the United States.” That was in 1976.

Back in the U.S., Woodward held a number of jobs and also auditioned for the New York Philharmonic. A call from Ballet West to play principal got him back to Utah. In between performing, Woodward sold pianos. But he was more than ready for a change. “I wanted a teaching position,” he said. “I wanted to teach kids. I always had a yearning to do that.”

It was in October 1979 that Woodward posted an ad announcing a new children’s choir. “I wasn’t sure how good I was going to be. I was just trying it out.” At the time, there weren’t many children’s choirs in the U.S., so Woodward was exploring fairly new territory. “I used children’s choirs in Europe as my model,” he said. Utah, of course, has had a long tradition of choral music so it was a logical step to take. “I figured, why not extend this choral tradition to embrace children.”

His first choir was small, but he had enough young singers who were good enough to put on a Christmas concert. “The concert – it was more like a recital – was held in Whitmore Library.” One of the pieces the children sang was “Lo, How a Rose E’er Blooming,” a song that has been part of every Christmas concert since.

Woodward has had tremendous success with his choir. The Salt Lake Children’s Choir is recognized as one of the foremost children’s choirs in the country and Woodward has been recognized for his work with young voices. This past summer he received the 2012 Pioneers of Progresss Award in historic and creative arts, the newest honoree in a long line of illustrious musicians who have been acknowledged for their contributions to the arts. Among past recipients have been Maurice Abravanel, legendary music director of the Utah Symphony; Ardean Watts, associate conductor of the Utah Symphony under Abravanel and distinguished lecturer on music; Michael Ballam, founder and director of the Utah Festival Opera and Musical Theatre; and Crawford Gates, prolific Latter Day Saint composer of works such as the music to Promised Valley and the Hill Cumorah Pageant.

When pressed, Woodward, who is by nature a modest man, reluctantly admits he is pleased to have been selected for the award. “I am frankly a little uncomfortable receiving this award. But on the other hand I’m delighted because this is a validation of what we have aspired to do. (The award) is an opportunity to have the choir recognized in a different way. And because of that I welcome it.”

But Woodward would be the first to say that it all comes down to the kids. Without them he wouldn’t be where he is today. And it all started from a simple wish. “I wanted to teach them to sing with angelic voices.”