Anyone contemplating seeing Florencia en el Amazonas at the Capitol Theatre should have a designated driver waiting to pick them up to take them home afterwards – the music is so lush it’s positively intoxicating.

Daniel Catán, the Mexican-born composer of Florencia writes in a style that is more than just reminiscent of Debussy and Puccini. Catán has assimilated the stylistic traits of these two composers, along with hints of Strauss and Wagner. Using this musical language works well for this opera, but also fails it.

The Amazon River plays a major role in Florencia. After all, the action in this two act opera takes place on a boat journey down the fabled waterway. But Catán’s music never captures the character of the sultry river and the steamy jungle. In a work such as Debussy’s La mer, for example, one can smell the salty sea air, so vivid are the images the composer conjures up with his music.

Catán never comes close to depicting the humid, steamy Amazonian jungle. His music doesn’t even ripple the waters of the languid river. It’s gorgeous, to be sure, but nondescript. It’s generic enough to be used in any context.

It doesn’t help either that Catán’s orchestration is too monotonous. He does include a marimba and some Latin American percussion instruments, but they don’t help make the boring orchestration more vibrant. 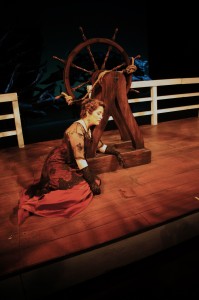 Soprano Cynthia Clayton, in the title role, gives a strong performance of the aging opera star returning home to give a concert and be reunited with her former lover. Clayton’s voice has depth and a lyrical flow that is well suited to the Puccini-esque vocal writing. Where it fails is in the high notes; at Saturday’s opening night performance Clayton seemed as if she had to stretch to reach them, and not with good results. Still, she gave a compelling portrayal of Florencia.

The two couples, Rosalba and Arcadio and Paula and Álvaro, were equally impressive, both in their singing and acting.

Soprano Andrea Carroll (Rosalba) has a bright and light voice that has an infectious lyricism to it. Her singing Saturday was fluid and captured the youthfulness of her character.

As her budding love interest tenor Jason Baldwin brought feeling and passion to the role of Arcadio. Baldwin has a resonant voice that stood out in the ensemble numbers.

Mezzo-soprano Kirstin Chávez and baritone Christopher Clayton are wonderful as the bickering couple Paula and Álvaro, who are able to reignite the love that brought them together in the first place. They have strong yet expressive voices that blended well together, although Chávez’s voice at times disappeared in the heavy orchestration.

Baritone Hector Vásquez, who created the role of Álvaro at the world premiere of Florencia at Houston Grand Opera 17 years ago, brought depth and sensitivity to his portrayal of the ship’s captain. Vásquez’s voice is richly vibrant and round and he sang with conviction at the opening night performance.

Rounding out the cast is baritone Nmon Ford as the mysterious, mystical Ríolobo. His beautifully lyrical voice, with its rich palette of expressions, and his solid acting enabled him to capture the enigmatic character of his role perfectly.

The Utah Opera Chorus, which only sings in the first act, performed with its usual vocal perfection.

José Maria Condemi’s stage direction was spot on and allowed the actors to move naturally. And conductor James Lowe elicited an articulate performance from the Utah Symphony.