Among his many interests, Gerald Elias has also become somewhat of a chronicler of Southeast Utah history.

In 2002, the violinist, composer and author wrote Conversations with Essie,which the Moab Music Festival premiered that year and revived in 2012. The piece is based on the oral history of Essie Larsen White, who in the early 20th century lived on a ranch near Moab where Red Cliffs Lodge now sits. 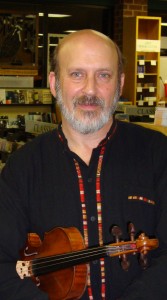 “At the time I wrote Essie I was thinking of all kinds of possibilities,” Elias said in an interview with Reichel Recommends. With his fertile mind, Elias was looking into subject matter for future works rooted in Utah’s red rock country.

One person who intrigued him was William Grandstaff (also spelled Granstaff), better known today as the namesake of Negro Bill Canyon. “William came to Moab and set up house in the fort that the Mormon settlers built and which they abandoned in the 1860s because of conflicts with the Indians,” Elias said. Grandstaff got along with the Indians and traded with them.

In the 1870s the settlers came back and were soon in conflict once again with the native population. But instead of acknowledging that the problems lay with them, the settlers blamed Grandstaff for getting the Indians riled up. “William feared for his life and left,” Elias said. “He went to what became known as Negro Bill Canyon, where he ranched.” It was the only spot in the area that had a permanently flowing stream. And it wasn’t too many years after Grandstaff had settled there that other settlers wanted that land. “He moved to Colorado where he became a saloon owner and was well respected in the community,” Elias said.

Elias’ Grandstaff, which the Moab Music Festival will premiere at its Sept. 1 concert commemorating Canyonlands National Park’s 50th anniversary, focuses on the moment where Grandstaff decides whether to stay and fight the settlers or leave. “Lurking behind the story is an element of racism,” Elias said. “But I didn’t make it contentious. I wanted to give people food for thought.”

In addition to writing the music, Elias also wrote the text. “I made it all up, except for one quote which I’m confident William said: ‘I have the feeling I am the Indian they are after.’”

Michael Barrett, co-director of the festival, suggested that the piece be scored for one voice and a few instruments. But Elias, who has a keen eye for the dramatic, decided to add two other characters beside Grandstaff. In addition to the title role, Elias also included a character named Frenchie, a scoundrel who lived in the area and knew Grandstaff, and Rebecca, the woman Grandstaff married after he moved to Colorado. “I decided to take some liberties and place her in Moab,” Elias said.

The 10-minute work is scored for flute, violin and piano and invokes the mood and spirit of the location and time. “I wanted the instruments to give a sense of place,” Elias said. “I wrote the flute part in Native American style rather than concert style, and there is a lot of fiddling for the violin. And the piano is a good instrument to help fill out textures and harmonies.”

The music for Grandstaff is very accessible, Elias explained. “It’s a tonal piece, generally. It has a somewhat contemporary sound but with a lot of folk elements.” As an example, Elias pointed to Frenchie’s music. Since he was a French-Canadian trapper Elias gave his music a Cajun lilt.

“William led an interesting life,” Elias said. “It makes a compelling story. There is a lot of humor in it and it’s a great theater piece that anyone can enjoy.”

(For a schedule of festival events please click here.)