WED AUG 27
PCFMF FILM SCORING SEMINAR:
By popular demand we have added one more film scoring seminar with composer Hummie Mann: Wednesday, Aug. 27, 7:00-8:30PM
The seminar is designed as an introduction to the process of scoring music for film, and serves as an excellent guide for filmmakers planning to work with composers and musicians, as well as for musicians and composers who want to learn more about creating film scores and working with filmmakers. 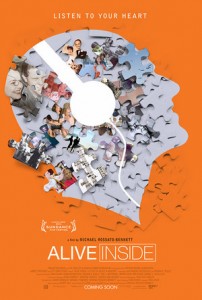 SAT AUG 30
“ALIVE INSIDE” Documentary Film Showcase Screening
Don’t miss the SHOWCASE SCREENING this weekend of the documentary film “ALIVE INSIDE”.
The screening will be at 3PM, Saturday, August 30, at the Prospector Theater, 2175 Sidewinder Dr. in Park City.
Tickets are $5 at the door or online in advance at this link:

ALIVE INSIDE is a joyous cinematic exploration of music’s capacity to reawaken our souls and uncover the deepest parts of our humanity. Filmmaker Michael Rossato-Bennett chronicles the astonishing experiences of individuals around the country who have been revitalized through the simple experience of listening to music. His camera reveals the uniquely human connection we find in music and how its healing power can triumph where prescription medication falls short.

This stirring documentary follows social worker Dan Cohen, founder of the nonprofit organization Music & Memory, as he fights against a broken healthcare system to demonstrate music’s ability to combat memory loss and restore a deep sense of self to those suffering from it. Rossato-Bennett visits family members who have witnessed the miraculous effects of personalized music on their loved ones, and offers illuminating interviews with experts including renowned neurologist and best-selling author Oliver Sacks (Musicophilia: Tales of Music and the Brain) and musician Bobby McFerrin (“Don’t Worry, Be Happy”).

An uplifting cinematic exploration of music and the mind, ALIVE INSIDE’s inspirational and emotional story left audiences humming, clapping and cheering at the 2014 Sundance Film Festival, where it won the Audience Award.

It must have been an exciting moment when George Lucas announced that there would be three more Star Wars movies, and that John Williams would once again take his place as musical master of the galaxy.

There can be no doubt that Williams blossomed as a composer during those many years, and his genius and experience would all contribute to gorgeous soundtracks for the new films. What an honor for George Lucas to have access to the artistry of one of the most talented composers of all time!

It is my personal opinion that because John Williams’ scores improve over time, we find music in the prequels that is richer, more heartfelt, more profound, and at some times more heart wrenching than the original trilogy. We are carried on an emotional journey through innocence, suffering, love, betrayal, and ultimate rebirth.

Beginning with The Phantom Menace, I fell in love with “Anakin’s theme” the minute I first heard it. Soaring strings produce a timeless portrayal of innocence and yearning with moments of foreshadowing darkness, representing the life of young Anakin Skywalker and what he was destined to become. The piece is played in a major key, but reincorporates a phrase from “The Imperial March” at the very end, slowing down to a haunting minor key. After the films are long gone and forgotten, this piece of music will forever stand as a sign of beauty and human achievement.

The most popular piece from The Phantom Menace is, of course, “Duel of the Fates,” which has an interesting background. Taking influences from Carl Orff’s “Carmina Burana,” Duel of the Fates was performed by the London Voices and the London Symphony Orchestra. The lyrics are a based off of a Welsh poem called Cad Goddeu (Battle of the Trees) and translated into Sanskrit, an Indo-Aryan language tracing its roots to India. Williams made this decision to give the scene an ancient religious undertone. The piece instills awe and fear into the listener simultaneously, intensifying the epic scale of the lightsaber duel at the end of the film.

The music of Episode I fulfills its duty to provide the Star Wars saga with a colorful palette of themes, textures, and emotions to draw from in the later films.

Anakin’s theme:
Duel of the Fates:

Now on to Episode II: Attack of the Clones—probably the least regarded of the six films, but it ironically has some of the most noteworthy music. John Williams knew he had to help the audience chronicle the relationship between Anakin and Padmé from professional to friendship to romance. And he did precisely what he does best—stunningly beautiful love themes that transcend the story to add another piece to the puzzle of the human condition, resting eternally in our hearts. “Across the Stars” is one of those pieces; it moves the soul to its very core. It emits sentiments of tenderness, infatuation, love, longing, and sadness from end to end. From the oboe solo at the beginning to swelling strings and brass, and ultimately to a lonely harp solo at the end, we feel the deep struggles and complexities of this forbidden, doomed relationship, hinted at by the piece’s minor key. “Across the Stars” will forever be one of my favorite John Williams pieces.

The next piece I will discuss carries with it a far lesser emotional attachment, but is nonetheless one of John Williams’ most fresh and original works to date. It underscores the nocturnal chase sequence through the shadowy cityscape of Coruscant, the political center of the Old Republic. “Zam the Assassin” (the title name of the track) utilizes many uniquely exotic forms of percussion and rhythmic styles. It seems that Williams got a little bit outside his comfort zone for this one. Brilliant musical phrasing and instrumentation combine to enliven the scene and take it to a new level. The piece has an slight Asian flare with its use of Japanese drums, suggesting comparisons between ultra-modern Coruscant and metropolitan Tokyo. The music’s rhythm propels the action and gives energy to the characters. This is a great example of music that not only matches the ever-changing pacing of the scene, but also stands alone to hold its own as well.

Music links:
Across the Stars:
Zam the Assassin:

Finally, we arrive at Episode III: Revenge of the Sith, arguably the most emotionally entrenching of the six films. When going to see the film for the first time, I was certainly excited, but not expecting anything more emotionally than what Attack of the Clones delivered. I was in for quite a shock—this time the music became more personal, more real. The exciting adventure music of battle sequences was replaced by a sorrowful, mournful treatment of the film’s major themes of betrayal, desolation, and despair. Such scenes became more deeply personal to the viewer. This is an example of a composer scoring to the character and not the scene, which in this case works very well.

This concept is exemplified in the track entitled “Anakin’s Betrayal,” a musical montage depicting the events of Darth Vader’s order to hunt down and destroy all the Jedi knights. As we are transported from planet to planet where all the Jedi are engaged in battle, their unexpected demise tugs at our heartstrings. Sometimes we don’t realize the extent to which music can affect us, even indirectly. Anakin’s Betrayal is primarily a string piece accentuated by choir, which creates a hauntingly heart wrenching experience.

Most well known in Revenge of the Sith is the piece “Battle of the Heroes,” fueling the volcanic fires of the planet Mustafar in the ultimate duel between master and apprentice. Originally, George Lucas wanted to use “Duel of the Fates” to underscore this battle, but soon realized that its dramatic tone would not be appropriately tragic for the situation. This new piece effectively “brings it all together” to advance us to the climax of, perhaps, the whole saga overall, when everything comes to a point. Anakin’s irreversible demise to the Dark Side of the Force is made all the more grave and heart wrenching by Williams’ use of hellish choir and rapidly changing brass. Though their descriptions may seem similar, “Battle of the Heroes” and “Duel of the Fates” couldn’t be more different, this time with a far more tragic undertone and a more intimate approach to Darth Vader’s characterization. This piece essentially defines the mood for the film’s end and leaves us feeling almost hopeless that all is lost.

Fortunately, Revenge of the Sith ends on a hopeful note with the birth of Luke and Leia, to be raised separately under the shadow of the Empire, someday to discover their heritage and destiny.

George Lucas had an enormous legacy to live up to when returning to create these three films. Many say he missed the mark. While it is true that the two trilogies are not quite consistent with each other in look and feel, and arguments can be made about the switch to computer-generated imagery as opposed to traditional film and models, one thing is for certain: the music stands as an anchor holding the films together. Were it not for John Williams, there would be no Star Wars.