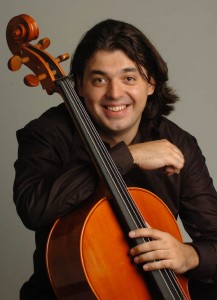 When cellist Viktor Uzur decided to start a chamber music festival he was hoping it would become a permanent fixture in Utah’s ever expanding chamber music scene. Six years later, Uzur is happy to say that the Bonneville Chamber Music Festival is here to stay.

The annual 10-day-long festival has its home at Weber State University, where the Serbian-born cellist teaches. The concerts tend to cover a lot of territory, and this year is certainly no exception. “For the first time we are doing five concerts this year, and we have some exciting programs,” Uzur told Reichel Recommends.

The first concert takes place Wednesday and features an all-French program, including music by Debussy and Chausson. “I’m looking forward to it because of what we’re playing but also because it will be recorded for future release,” Uzur said. Ray Kimber will record the program using his IsoMike recording technology. “He makes some fabulous recordings,” Uzur said. “He does things a little differently. Instead of placing the mics around the musicians, he positions the players to the mics. This makes a big difference in the quality of the recording.”

The second concert will be another first for BCMF. “The program will have music by Alfred Schnittke, whose music we have never played here before. He is a composer who is greatly respected in Russia. Many prominent performers have played his works including Gidon Kremer and Yuri Bashmet.” There is also a personal connection for Uzur. “I met him late in his life,” he said. Schnittke died in 1998.

In a completely different vein, guitarist Brad Richter joins Uzur for a program that’s been title “From Albeniz to Zeppelin.” “This will be music in a very different style,” Uzur said. “We will be playing some original pieces and also arrangements of more popular music.” Uzur and Richter, who lives in Arizona, met in 2005 when Weber State University commissioned Richter to write a work for guitar and cello. Since then, the two have been performing together as a duo and have received national attention. Their performances are frequently featured on “Performance Today” and they’ve recorded and toured quite a bit over the years.

The closing concert on March 30 will be another first, Uzur said. “We’re doing Fauré’s Requiem with a guest conductor, which we haven’t done before.” Coming to Ogden to conduct the concert is Manfredo Schmiedt, associate conductor of the Orchestra Sinfonica de Porto Alegre in Brazil and director of the orchestra’s chorus. “He worked with Helmuth Rilling and has a lot of experience with choral music,” Uzur said.

This concert will be dedicated to celebrating the life of Danièle Doctorow who passed away in 2010 and who was the first executive director of the Jarvis and Constance Doctorow Family foundation, one of the chief supporters of BCMF.

As at past festivals there are many returning musicians in the roster this year, including violinist Carmelo de los Santos; violist Spencer Martin; and pianist Bojan Martinovic. New this year is violinist Monte Belknap from Brigham Young University. “I’m looking forward to having Monte join our festival, and I hope this will be the start of a long collaboration with him,” Uzur said.

Below is a schedule of concerts. All concerts start at 7:30 p.m. and unless otherwise noted ticket prices for the concerts are $12 for general, $9 for seniors and free for students. There is a 25 percent discount when purchasing tickets for two or more concerts. Tickets are available either by phone at 800-978-8457 or online at www.weberstatetickets.com.