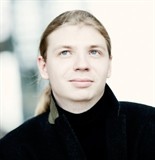 This weekend the Utah Symphony will take a break from the Beethoven symphony cycle to perform a concert of early works by Russian composers. The concert will feature two young guest artists performing in Utah for the first time: Scottish conductor Garry Walker and Russian pianist Denis Kozhukhin. The program will include Stravinsky’s rarely performed Symphony No. 1, op. 1, Prokofiev’s Piano Concerto No. 1, op. 10, and Tchaikovsky’s Symphony No. 2, op. 17.

Kozhukhin has had a remarkable career for a pianist still in his mid twenties. His success on the piano competition circuit reached its zenith last year with a win at the Queen Elisabeth competition in Brussels. For his first concerto cycle, to be performed this year with the BBC Scottish Orchestra, the young pianist has chosen the works of Prokofiev, who is often considered to be among the top composers for piano. Kozhukhin told Reichel Recommends that the first concerto, composed while Prokofiev was still a student, is one of the first he performed with a symphony orchestra.  “… I have a very special relationship with this piece and like to play it as it is a very fresh piece, full of youth, emotions and optimism, but already (containing some of the) sarcasm that is so typical for Prokofiev´s music.…His music is very attractive to me because it combines the pure Russian spirit with very classical forms which makes it really unique….There is always a story in his music.”

While Kozhukhin has performed throughout the world, he says he always appreciates playing for American audiences. “What I like in the U.S. public is their freshness of the perception of music, great attention to what is happening on stage and huge love and respect for music and arts in general. I am really looking forward to playing in Utah, which for me is a big step to discover many new things about U.S. and its public.”

Stravinsky also wrote his Symphony No. 1 in E flat major while still a student. At the time, the composer was studying under Rimsky-Korsakov and dedicated the four-movement work to him due to his considerable influence on the piece.

Tchaikovsky’s Symphony No. 2 uses folk music more than any other work by the composer. At that point in his life, Tchaikovsky was deeply affected by the music of Ukraine, and chose to directly quote its folk music in three of the four movements. Though the piece had an incredibly successful premier, the composer wasn’t satisfied and went on to complete major revisions of the work seven years later.  These revisions resulted in a completely new first movement, along with a substantially shorter finale.