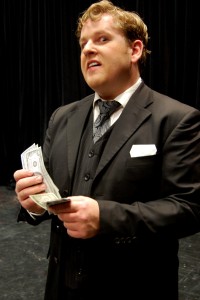 Blitzstein had leftists leanings so it shouldn’t be surprising that the piece is a scathing critique of the dark underside of capitalism. It’s set in “Steeltown, U.S.A.,” where Larry Foreman tries to unionize the town’s workers and thwart Mr. Mister, an unscrupulous and greedy businessman who controls the city’s factory, press and church – in fact, everything in the city.

One can draw a lot of parallels between the United States of the 1930s and today, when the country is still reeling from the Great Recession. And because of that it should resonate with a modern audience. That’s one of the reasons the performing arts department at Weber State University decided to stage it, in collaboration with the Associated Actors and Technicians. “When we found out we would do a main stage production we went back and forth about things to do,” said the show’s director, Trent Cox. “We finally decided on doing The Cradle Will Rock because it is a rarity and because it has an important place in theatre history.” It also has significance for today’s politically charged atmosphere, with the Occupy Movement in the center, Cox added. “With Mr. Mister you have the one percent against the 99 percent. It’s a show that can translate to what is happening today.”

The Cradle Will Rock was written in 1937 as part of the Federal Theatre Project, one of the several projects that were sponsored by the Works Progress Administration (WPA). It was directed by Orson Welles and produced by John Houseman. But the show’s themes were a little too much for officials from the WPA to swallow. They threatened to shut it down and arrest the actors if it opened.  “When it was shut down, Orson Welles and John Houseman scrambled to find another place,” Cox said. “They found a different theater and walked the 21 blocks to it, gathering the actors along the way.” 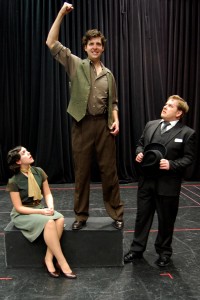 Blitzstein was feisty, though, and wouldn’t admit defeat and give up. He was onstage alone at the start. “Gradually the cast, which was seated in the audience, would join in from where they sat,” and that’s how they did the show, Cox said.