At a press conference Monday in Abravanel Hall, Utah Symphony music director Thierry Fischer outlined his thoughts on the upcoming season and explained the abundance of concerts with music by Tchaikovsky and Rachmaninoff. “That was a deliberate choice, because it gives greater diversity for me and for the guest conductors,” he said. But not everything is coming up Russian this season. “The season will be divided up among Russian, French and classical and baroque music.”

Following up on this season’s Beethoven symphony cycle, Fischer and the orchestra will play the complete Mendelssohn symphonies. “After this season with a very strong cycle of Beethoven’s symphonies, I wanted to follow with another cycle that will help the orchestra reach new heights,” Fischer said. The reason he chose Mendelssohn’s symphonies was quite simple. “He is a more lyrical composer but his music is still demanding.” 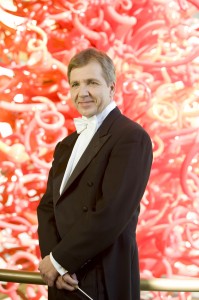 Fischer’s continual perusal of all of Stravinsky’s orchestral music will continue in the new season, with several large works, including Dumbarton Oaks (Sept. 28-29),  Jeu de cartes (March 8-9, 2013) and the Violin Concerto (Feb. 8-9, 2013).

Making good on his promise to commission a new work every season during his tenure here, and following up on the recent success of Michael Jarrell’s Emergences (Nachlese VI), Fischer and the orchestra will give the world premiere of a new work by British composer Simon Holt. That takes place on April 26-27, 2013.

But unlike the Jarrell work, which was a joint venture with three other orchestras, Holt’s work will just be a Utah Symphony commission. “With the Jarrell piece I wanted a concerto,” Fischer said, “but with the Simon Holt work I wanted a purely orchestral piece written especially for us.”

Holt is the composer-in-residence at Fischer’s other orchestra, the BBC National Orchestra of Wales, and Fischer has conducted several of his works. And, in fact, he will be premiering a new work by Holt, The Yellow Wallpaper, with the BBC NOW in April.

Of equal, or greater importance, to unveiling the new season was US|UO CEO Melia Tourangeau’s announcement that the organization has extended Fisher’s contract through the 2015-16 season, which will be the Utah Symphony’s 75th anniversary season.

As with the current season, Fischer will once again conduct 12 of the symphony’s 18-week masterwork series.

Guest conductors for the remaining six concerts have all been here in the past:

Having guest conductors who aren’t newcomers to the Utah Symphony is part of Fischer’s overall plan for the orchestra. “I want to build strong relationships with conductors,” Fischer said, adding that it’s important to have conductors who can bring something to the table that will benefit the orchestra.

The line up of soloists coming to Salt Lake City includes several returning artists. Among them are violinist Hilary Hahn on Nov. 16-17 playing the Korngold concerto; pianists Pascal Rogé on Dec. 7-8 playing Ravel’s G major Concerto, and Louis Lortie who will give a marathon performance on April 19-20, 2013, playing all three of Tchaikovsky’s piano concertos; and soprano and Utah native Erin Morley in Mendelssohn’s Symphony No. 2 on Sept. 28-29.

Among the soloists making their Utah Symphony debuts are violinist Tobias Feldmann in Sibelius’ concerto on Jan. 11-12, 2013, and pianist Lukas Geniusas (2010 Gina Bachauer gold medalist) in Rachmaninoff’s Rhapsody on a Theme of Paganini on Oct. 26-27.

In a special one night only performance (without the symphony) pianist Lang Lang will play a recital in Abravanel Hall on Oct. 9. The start time for this concert is 7 p.m.