Two Utah natives and a former student at the University of Utah won the Utah District auditions of the Metropolitan Opera National Council Auditions Saturday in Libby Gardner Concert Hall.

They are: soprano Melissa Otani-Jensen, 26, from Orem; soprano Rebecca Pedersen, 21, from Bountiful; and baritone Jared Bybee, 26, from Modesto, Calif., who studied music at the University of Utah and now studies at the Academy of Vocal Arts in Philadelphia. Otani-Jensen was a student at Brigham Young University and the Manhattan School of Music. Pedersen is currently a student at BYU. 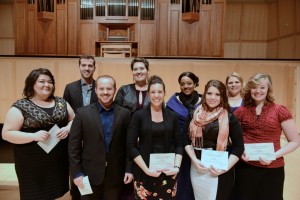 Each will receive $750 in cash and will compete with the winners of the Colorado-Wyoming District auditions at the Rocky Mountain Regional auditions on Jan. 27 in Denver.

There were 27 singers performing Saturday. They were judged by Metropolitan Opera star Anthony Dean Griffey. He was joined by Joshua Winograde, senior director of artistic planning for LA Opera; and Peter Kazaras, director of opera at UCLA and artistic director of the Seattle Opera Young Artist program.