Claude Debussy’s 1905 composition La Mer is the quintessential orchestral work from the French impressionist movement. At once pictographic and abstract, Debussy’s work captures the energy and motion of the sea and manages to harness that deep connection many of us feel to our watery neighbor. It flirts with the idea of program music, but never makes anything explicit the way other program music does.

While Debussy may have made a bigger splash (in purely innovative terms) with his revolutionary early work Prélude à l’après-midi d’un faun (Prelude to the Afternoon of a Faun), La Mer eclipses that work in terms of sheer command over the orchestra and compositional polish. It is a remarkable work of nuance, color, masterful pacing and, when necessary, tension and muscle that could only have been accomplished through a lifetime of dedication to the art of composition.

If one needed proof of the importance of La Mer, one would only need to look at the history of the constant production of recordings of the piece.  Many major orchestras and conductors have taken the time to record the work. For example Amazon.com (the world’s largest retailer of musical recordings) lists 440 recordings of the piece as currently available. While many of these may be reissues of other previously released recordings, it makes one wonder how many older recordings have since gone out of print or never made the transition to the digital era.

With this in mind, Reichel Recommends decided to investigate the new recordings that have been made since the year 2000. This date was chosen to narrow down the field of recordings, and was completely arbitrary. Over 25 new recordings were auditioned, and after much careful listening and contemplation, the five best recordings have been selected and ranked. This was no easy task, as the overall quality of these recordings was astonishing, highlighting how incredibly tough the competition is in the world of classical records.

Choosing a recording for one’s personal library can be a daunting task, as there are many issues to consider: How many recordings of the piece exist? How well was the orchestral technique executed? Does the interpretation satisfy my personal taste? Is the sound quality good enough? What other works (if any) are presented on the recording? Can I play the recording in its presented format, whether as an LP, tape, CD, digital download or Super Audio CD?

A note regarding the various formats of the recordings: digital downloads, CDs, and Super Audio CDs (SACD) all require compatible players to properly play. Be careful, as the various formats often look similar and are sometimes presented in almost identical packaging. Check for the correct logo on the packaging. Hybrid SACDs deliver both a high resolution surround sound and stereo mix, and can be played on both regular CD players and specialized SACD players, though the higher quality audio and surround sound capabilities will only be available when using SACD players.

With these things in mind, Reichel Recommends presents the top five recordings of Claude Debussy’s La Mer, made since 2000: 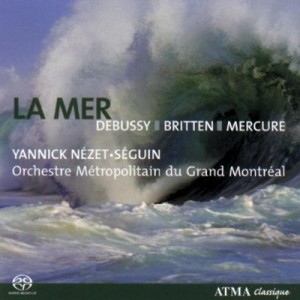 The 36-year-old French Canadian conductor Yannick Nézet-Séguin has taken the world of orchestral classical music by storm. Nézet-Séguin originally conducted opera and orchestral music exclusively in Montreal, but has recently accepted the position of music director of the Philadelphia Orchestra, a remarkable appointment for a conductor so young.

In this 2007 recording, Nézet-Séguin leads the lesser known Orchestre Métropolitain du Grand Montréal in a sea themed recording of remarkable energy and sensitivity. Don’t let the relatively unknown orchestra cause worries: the music lovers in Montreal are absolutely spoiled by two world class ensembles, the other being the wonderful Montreal Symphony Orchestra.

This is the recording that brings together all of the necessary elements needed for the listener to simply become lost in the music. The rubato and dynamics are seamless, expressive, and sometimes used in effective extremes to really make the music soar. The orchestral performance isn’t the best of the bunch, but is so good that the few minor flaws in the sound don’t detract from the supreme musical experience offered here.

The sound quality is among the best I’ve heard in a recording, and is presented in the wonderful SACD format (compatible with regular CD players), offering high resolution surround sound or stereo mixes that capture a near perfect orchestral balance, genuine instrumental timbres,  and a lush ambiance.

In spite of the genuine quality of so many other presentations of Debussy’s masterwork, this recording became the clear winner thanks to Nézet-Séguin’s flawless direction and transcendent interpretation. This recording is recommended without reservation, and is sure to satisfy even the most critical listener. It’s never been a better time to be a music lover. 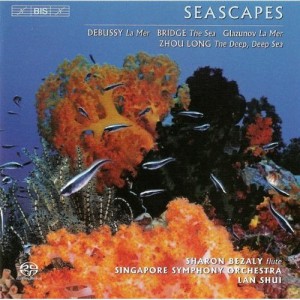 In this 2009 recording, Chinese-American conductor Lan Shui leads the Singapore symphony Orchestra in another sea themed orchestral disc that rises close to the top of the many interpretations of La Mer. The orchestra succeeds at bringing out many of the inner lines from the score that are often lost in other interpretations, but never at the expense of the depth of the orchestral sound. Shui’s interpretation takes few risks but still satisfies; the music is vivid, colorful and clear. When working with a score of this caliber, many savvy conductors will allow it to exist on its own terms rather than imposing an outside viewpoint and Shui is certainly savvy enough to allow that to happen with this particular score. He holds the orchestra together very well, and uses carefully chosen tempi and dynamics to a grand effect.

The BIS sound engineers delivered a well crafted, balanced and articulate sound quality which is par for the course with this particular label. This recording also offers surround sound and high resolution sound quality for those who own a SACD player. 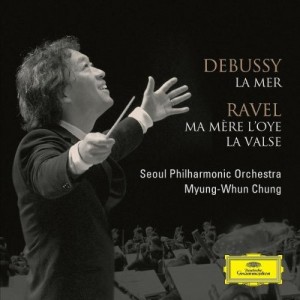 A towering figure in Korean music, Myung-whun Chung has won numerous awards not only in music, but also as a supporter of humanitarian causes. He has conducted throughout Europe and Asia, and since 2006 he has been the music director and principal conductor of the Seoul Philharmonic Orchestra.

The rise of Asian orchestras has been a welcome addition to the now global discourse on classical music. In this recording, the orchestra displays a level of polish and finesse that places it easily within the top tier of orchestras across the world. Responding to a deliberate, unhurried and nuanced interpretation by Chung, the orchestra presents a lush and multihued depiction of Debussy’s masterwork.  The sound quality was captured with remarkable clarity and depth by the Deutsche Grammophon engineers, providing a wonderful listening experience with this CD release.

If the quality of the orchestral sounds were my only consideration this recording would have easily been placed at number one on this list. The Berlin Philharmonic under the British conductor Simon Rattle certainly made some astonishingly beautiful sounds and created moments of sheer musical euphoria on this recording, but the overall experience was slightly marred by Rattle’s sometimes heavy hand.

Rattle and the Berlin ensemble turned in the finest first movement of any of the recordings listed here. Small issues arose during a few moments in the second and third movements where the flow of the music was unfortunately interrupted by some uneven tempi and some over-shaped phrases.

These are rather small complaints overall and, as mentioned, there is much to admire on this recording. Sound quality was top notch. 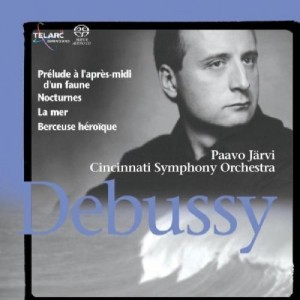 Paavo Järvi’s interpretation of La Mer differs quite radically from the others on this list. His use of rubato to shape phrases is far more reserved than the others, and he often enters sections where the tempo is incredibly slow, allowing the music to gradually build and decay over relatively long periods of time. This makes for an interesting listening experience, but it doesn’t always lead to the best presentation of the musical material.

The Cincinnati Symphony Orchestra’s performance, while credible, leaves me wishing for better intonation,  balance and articulation though there are moments where the performers sound as good as anyone.

The Telarc production provides a sound that is more reverberant than most, which causes many of the details from the score to be lost somewhere within the larger overall sound. The effect is not unpleasant though, and many listeners might argue that this type of production offers a more realistic listening experience when compared to live concert listening.

There are better versions of La Mer available, but this recording should be considered a contender as the other works on the release tend to hold up better under scrutiny.