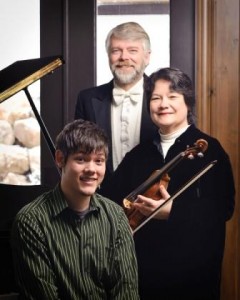 Sometimes we call the effect that hearing a piece of music has on us “magical.” Richard Hatch, however, takes it a step further.

Hatch is a professional magician, or “deceptionist” as he likes to call himself, who combines magic with music. Together with his wife Rosemary, who is a violinist, and their pianist son Jonathan, Richard Hatch performs classic magic acts set to classical music. And anyone who fancies a drive to Logan this Saturday afternoon will be able to see the family perform.

On the second Saturday of every month the Hatches put on a 75-minute program in Logan’s historic Thatcher-Young Mansion, which is located at 35 W. 100 South. And if you’re thinking that what you’ll get is your run-of-the-mill magic show with background music, you’d be wrong. Hatch choreographs his moves to fit the music, and he and his wife spend a lot of time finding the right pieces and pairing them up with specific tricks. “Everything is well integrated,” Hatch said in a phone interview with Reichel Recommends.

It isn’t always easy finding the right combination, Hatch said, but when you do the result is, well, magical . “Usually I’ll say to Rosemary, ‘Hey, here’s something that would be enhanced if you find the right music.’ And she’ll say, ‘Let’s let it percolate awhile.’” But it normally doesn’t take too long for her to find suitable music for each of her husband’s tricks.

For the show Hatch uses classic tricks, many of which have been around for centuries. One of them is the bamboo trick which originated in Japan some 400 years ago. A number of bamboo sticks are tied together and Hatch uses the sticks to help tell a story about a boy who wants to become a fisherman. “Rosemary found a piece by Japanese composer Michio Miyagi which was originally written for the  shakuhachi. She transcribed it for violin and plays it while I tell the story.” The piece is called Haru no Umi (The Sea of Spring).

And for the popular cups and balls act, Rosemary Hatch plays a Scott Joplin rag. “It works. There is a lot of interaction between both the trick and the music.”

There will also be an illusion performed to The Swan from Camille Saint-Saëns’ Carnival of the Animals.

In addition to the ensemble pieces, there will also be magic and musical solos which will include music by J.S. Bach. “The solos help add texture to the program as well as showcasing the various talents,” Hatch said.

For Hatch, it’s important to have the magic and the music as equal partners. “I would like to have them connected. I don’t want the music to just accompany the magic.”

Hatch grew up in Cache Valley and has been performing around the country for some 30 years. Last fall he and his family moved from Texas to Logan and decided to do these magic/music shows. This weekend’s performance will be their third and Hatch said their fan base has been growing steadily. “This is a family friendly show with broad appeal. And I like to keep people on their toes.”

The Hatches call their monthly show “Matinée Enchantée,” in honor of Jean Eugène Robert-Houdin, who is considered to be the father of modern magic. “He revolutionized the art and took it off the streets and into the theater. He was the one who started public theatrical performances, calling them ‘Soirée Fantastique,’” Hatch said. “Ours is a historical homage.”

The theater in the Thatcher-Young Mansion is small, seating only 56 people, but Hatch likes it. “I enjoy the intimacy. The audience becomes a part of the show.”

In addition to their performances, Hatch also runs a magic studio and his wife a violin studio in the mansion.

There is no show in July. Performances will resume in August.

Tickets: $10 adults, $7 children under 12 (advance purchase is strongly recommended as less than 20 seats are still available)