Claudio Monteverdi’s 1642 opera L’incoronazione di Poppea is the oldest opera still in the repertoire today. That it has survived the centuries shouldn’t come as a surprise to anyone who knows the work. It tells a compelling story of political intrigue based on historical fact. Poppea is Nero’s lover and she uses sex to get her way with him. She wants to be his wife and she doesn’t let anything stand in the way of her ambition, no matter how many lives are destroyed. Monteverdi crafted a dramatically and musically sound work that tells the story in a simple yet direct fashion that captures the human emotions powerfully.

Another reason that Poppea has survived is that the basic premise of the story is timeless. Sex and politics have been intertwined forever, whether in Nero’s time, in early 17th century Italy or contemporary America. And that’s what stage director Michael Scarola has tapped into in the Lyric Opera Ensemble’s production of Monteverdi’s masterpiece, which is playing this weekend at Kingsbury Hall.

Giving Poppea a modern look works remarkably well, even with the traditional set (borrowed from Utah Opera’s 1998 production). Scarola effectively points out that the action could just as easily take place today. The characters might have different names today and live elsewhere, but their deeds are the same. Unfortunately, this doesn’t say much about the human condition, but then Scarola is just giving his audience something to think about.

Another effective device is having the ancient gods, who open the opera, appear throughout and manipulate the humans. This adds a different perspective to the actions onstage – the gods (fortune, virtue, love) might manipulate the humans, but what is most interesting is how the humans react in the situations they’re placed in. And for the most part, it’s not very nice.

The singers at Thursday’s dress rehearsal (the same cast who will sing at Saturday’s performance) were absolutely wonderful. Their performances were honest and sincere and they brought credibility to their roles. Breault has had some fabulous voices in his opera program, and the current group is no less impressive than those of the past. They sang with conviction and underscored their vocal talents with some first rate acting. 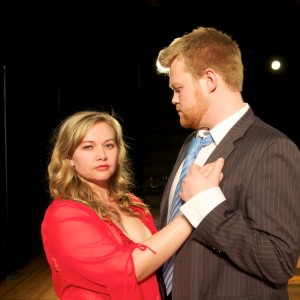 Topping the list is Melissa Heath as Poppea. Possessing a gorgeous voice she brought her character to life with her wonderful portrayal. And she brought sensuality to a new level in her love scenes with Nero.

Andrew Maughan as Nero was also striking. He brought depth to his role and showed off fine vocal technique.

Michelle Alexander as Ottavia, Nero’s wife, almost stole the show from Poppea and Nero. She has a powerful yet exquisitely expressive voice and she was in fine form Thursday.

Ottone’s character was also finely chiseled in Miles Romney’s portrayal. He brought poignancy and dignity to his role as the rejected lover who just cannot bring himself to murder Poppea, even when Ottavia orders him to.

Matthew Castleton was splendid as Seneca. His lyrical voice captured the depth of his character, and he brought tenderness and feeling to his suicide scene, a scene that is without question one of the most memorable in the opera.

The smaller roles were also well cast. Among them, Julia Wentz stood out as Drusilla.

The singers in the roles of the various deities were well chosen, too. Courtney Camp (Love), Madelyn Gilbert (Fortune) and Olivia Maughan (Virtue) were wonderful, as much for their acting as their singing.

The orchestra, under the direction of Jeffrey Price, played with precision and articulation.