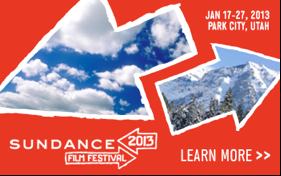 (contributed by Leslie Harlow) The official Sundance Film Guide is available online at the Sundance Festival Website. There are many film venues during the festival in Salt Lake, Ogden, at Sundance Resort and all over the Park City area.  There is more to the Sundance Festival in addition to attending films. There is no fee to attend the film festival itself – just admission fees to see the films, and “credentials” and film passes are required to attend some of the events, performances, ceremonies and parties. Various “lounges” and “cafes” around Park City are open to the public from 10am to 5pm, so visit this link to learn more about cutting edge art and technology installations, panel discussions and music performances.

Prepare before you go: To help make your experience the most successful, visit the Festival website and become familiar with the venues.

For those of you who don’t have tickets and want to take your chances on getting to see some films in Park City (just one of the venues, but it is the big one), head there early in the morning to beat the traffic, and be ready to spend a fun day using the free shuttle buses and walking. As you drive into town, follow the signs to free parking areas where you can catch the Festival shuttles that circulate to all the venues. If you want to get warm and study the transit map, you can stop in at the Park City Transit Center located on Swede Alley, one street over from Historic Main Street. Also, in the Gateway Center, right across the street from the Transit Center, you can shop for those cool Sundance souvenir items at the Sundance Co-op.

For those of you who have never attended, it is possible to get into some of the films, even if you haven’t purchased tickets in advance. Though it may seem inconvenient, it actually turns out to be fun to head early to venues where you want to try to see a film and pick up “Wait List” vouchers with assigned numbers. That may require waiting in line for awhile just to get the vouchers. Our recommendation is to print out the .pdf film guide, then use your phone or tablet to check the online guide while you are actually at the Festival – If a film is already sold out, that fact is usually posted online on the guide. Many of the films are already sold out when the Festival starts, so being open to attending films other than your first choices is a good plan.

Occasionally you can get into “sold out” films, but generally speaking it may require that you are very near the front of the “wait list” line.  While in that line you can depend on the legion of Sundance volunteers there to help you. They can sometimes provide updates on your chances of getting into the film you are waiting for. Inside information: Some folks who have picked up wait list vouchers decide to give up, so even if your wait list number is high, as the film start time approaches there will be a point where the volunteers announce that anyone else arriving later will have to go to the end of the line, regardless of their number, so, by default, you can end up closer to the front of the line than your number indicates. The largest venue is the Eccles Center – sometimes a good bet for getting in. If you are a person who cannot stand up for a long time, bring with you one of those handy little portable cane/stool combinations, so you can sit while you wait.  Waiting in line can be quite entertaining if you like to “people watch” and you can easily end up standing in lines for over an hour.  The recommendation is to bundle up in layers – some of the lines are outdoors, but at venues like the Prospector Lodge, everything happens indoors. Folks often strike up conversations and your fellow film fans will be from all over the world. Bring a paperback book, your Kindle, etc.  There are food vendors or restaurants near or at the venues and water stations at various locations as well.

The first weekend of the Festival is always a great time to make the trek up and down Historic Main Street. There are films screening at the Egyptian Theatre at the top of Main and traditionally a number of the stores on Main are turned into “lounges” you can visit. The restaurants will be busiest at night, but, again, that can be fun. The Main Street Deli is usually a good bet for getting a bite relatively quickly.  There is a free trolley that runs up and down Main Street if you get tired of walking.  Be sure and bring you camera or have your camera phone in hand, too.  Near Prospector Lodge there are also many excellent restaurants within easy walking distance of the venue.

As the Festival progresses the crowds thin out somewhat, but if you are interested in the panels and extra events, do try to attend during the early part of the Festival – some installations last less than the entire Festival, so be sure to check out the schedules for each activity as well as the hours.

To attend a panel discussion, you usually need a ticket, so now is the time to try to get tickets: Link to Panels

For the most part live music performances are in the “popular” vein centered around singer/songwriters and amplified ensembles. You can sometimes catch performances by film composers showcasing their contributions. Visit the website and check out the ASCAP Music Cafe, the BMI presentations and the Salt Lake Music Cafe events.  Even though “credentials” are required to attend more of the evening events you may be able to get in.  However, it is easier to get in during the day – just check the listings. Be prepared for loud performances and loud crowds with an exciting vibe.

“Happy Sundancing” and when you do attend, be sure and post to ReichelRecommends.com about your experience.