The program will open with NORWWEGIA. “We’re very excited about Netta’s piece,” said Charon, Ririe-Woodbury’s artistic director. “She’s made an eclectic dance in five sections, each of which with a different esthetic landscape.”

This will be the first time Ririe-Woodbury has performed one of her works. “I’ve known her for the last 15 years, but our company has never done anything by her.”

The second half will feature Charon’s 53 Rooms, which he choreographed to Terry Riley’s seminal minimalist piece, In C. 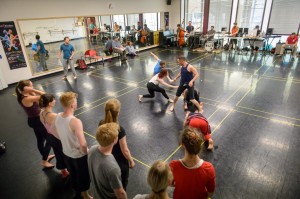 A recent rehearsal of "In C." (Photo Credit: Stuart Ruckman)

In C, which celebrates its 50th anniversary this year, is intricately crafted, starting with a beat, or “pulse,” as Riley calls. One instrument after another enters, with all instruments playing the same set of motivic fragments, or chords, successively. There is a lot of performer choice involved, and there are no set numbers of instruments required for a performance.

For this performance, Ririe-Woodbury will be collaborating with the Salt Lake Electric Ensemble (SLEE), who will be realizing it with an interesting configuration, including laptops.

Starling, who is a contributor for Reichel Recommends, said that this is the first highly visible choreography of In C  that he is aware of. “We’re thrilled that a dance company with an international following and reputation like Ririe-Woodbury contacted us. It’s a big opportunity for us, and we were all on board right away.”

Starling said that SLEE and Charon have been working closely together since both groups agreed on this collaboration. “We’ve been in constant conversation. It’s a two-way street, a real collaboration.”

There will be three performances of this program, and Ryan Fedor, another member of SLEE, said that no two will be the same. “There is some built in improvisation in the

piece so each time we play it, it will be different.”

Joining the company’s six dancers for In C will be members of the University of Utah’s modern dance program.

“It’s going to be a dynamic evening with some really interesting things happening,” Charon promised. “There are going to be elements that are intellectual, thoughtful and visceral.

“I just want everybody [in the audience] to go along for the ride.”

(Be sure to visit our monthly dance calendar by clicking on “Events Calendar.”)