Michael Wyatt is a composer and cellist based in Provo, Utah. His compositions have been featured on WPRB's "Classical Discoveries" with Marvin Rosen, BYU Radio's "Highway 89," and various film festivals throughout the United States and Canada. He works as a radio producer for 89.1 FM, and you can periodically hear his reviews and essays on BYU Radio's "Morning Show." He can be contacted at http://michaelwyatt.weebly.com/

The Utah Opera’s new Barber of Seville is a delight. World-class singing combines with witty staging, lavish sets, and hilarious acting for a performance that kept the audience charmed and riveted.

From the chorus to the leads, the cast was largely magnificent. Figaro, the eponymous barber, was sung expertly by Will Liverman in his Utah Opera debut. Liverman is a rich and resonant baritone, and at the very beginning of the iconic “Largo al factotum,” it was clear he would knock this one out of the proverbial park.

Robert McPherson’s Count Almaviva was an excellent complement to Liverman’s Figaro. While Liverman sang with a warm lyricism (at sometimes breakneck speed), McPherson delivered his extravagant coloratura passages with an impassioned exuberance.

The pairing of these two voices brought out a subtle difference in their characters’ personalities and motives, which Rossini deftly worked into the score. But it was their compelling performance that drove those nuances home.

Celena Shafer infused an almost athletic vigor into her singing of Rosina. The varied palette she brought to all the twists, turns, trills and tremolos in her arias was astonishing. In sum, her singing was a brilliant synthesis of virtuosity, spectacle and comedic genius.

Happily, the opera was as well directed as it was sung. The staging was creative and clever, and my amazement at the musical quality of the performance was interrupted only by my joining in the roaring laughter of the audience.

Obviously, there’s a lot of comedy inherent in the text itself. Just reading the libretto would be funny enough. But stage director Tara Faircloth introduced some brilliant blocking to the brawl scene in Act I and peppered the rest of the show with unexpected gags and laughs.

There was very little to complain about in the production. The chorus sounded fantastic, the supporting cast was as impressive as the leads, and the period costumes and sets were many and lavish.

Because this was such a fine performance, I hesitate to be overly critical. But. The overture felt rushed and a little scattered. In particular, the famous trills and melodies in the violins sounded muddied.

But this is a minor grievance, and missing this wonderful production would be a much greater tragedy than a few out-of-sync violins.

Comparisons between the Utah Lyric Opera’s La Traviata from last season (their first fully staged opera with a full orchestra) and their current production of La Bohème are inevitable. Both productions had the same director (Elizabeth Hansen) and conductor (Stephen Dubberly), and even some of the same costumes. Both protagonists die of consumption in Paris around Carnival season. And both productions were good. But as much as I enjoyed La Traviata, the ULO did a much better job with La Bohème.

For starters, everything just ran much more smoothly this season. The sets were much more elaborate, impressive and functional than the sofa and tables in La Traviata, and the costumes came off as deliberate rather than just available.

Hansen once again chose to advance the setting of the opera to the 20thcentury, and although I don’t know how much that deepened the story, it made available some great 1940s costumes, which I certainly don’t have a problem with. 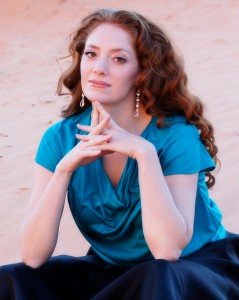 The amazing thing about the ULO is the quality of their local talent and their ability to pull in outstanding talent from elsewhere. Tenor Isaac Hurtado, for example, had a voice and presence equal to his role as Rodolfo. Early on in the performance, his upper register had an airy quality to it, but as the night went on it became richer until his last cry of “Mimì, Mimì” filled the theater.

Baritone Christopher Holmes, who tripled as executive director, chorus master and Marcello in this production, was solid in his supporting role, playing off of Hurtado, Musetta (soprano Jennie Litster) and the other bohemians with wit and chemistry.

Litster was essentially perfect in her role as Musetta. Her acting was nothing short of hilarious and her singing was superb. She had a way of making herself the center of attention, which worked so well with Musetta’s character

And then there was Mimì, played by soprano Lisa Hopkins Seegmiller. Her credentials are as impressive as her voice. She won a Tony for her role as Mimì in Baz Luhrmann’s (director of the Leonardo DiCaprio Romeo + Juliet) Broadway staging of La Bohème, for which she was also nominated for a Grammy. Seegmiller’s voice had the clarion quality of a ringing bell, and when she was really going full throttle it felt like I was sitting in the center of cathedral chimes. But she also deftly brought out a vulnerability and sincerity to her singing as the scene required.

The actual drama is at the heart of these ULO productions. The first two acts had the audience roaring with laughter due to the excellent staging and acting of the cast. When the bohemians throw out their landlord in mock moral horror, the scene had all the musical heft as the climax of Don Giovanni, and therein lies part of Puccini’s comedic genius.

Puccini writes mini arias of ironic devastation over a burnt manuscript, painful shoe or a lost coat with the same weight that his contemporaries would write an opera with in earnest.

The cast was so good at the mock misery that I was worried Mimì’s death in the last act would be overshadowed by the comedic genius of the first half of the opera. But Puccini and Hurtado saved the day. Until that point, all of the mock melodrama was longwinded and pedantic, but when Rodolfo is confronted with his beloved’s death, his only line is a sincere, “Mimì, Mimì.”

With La Bohème, the ULO has proven that last year’s La Traviata wasn’t a happy accident or fluke. They have the native talent and know-how to produce consistently excellent work.