Matt Starling is a performing musician, music educator, audio engineer and founder of the Salt Lake Electric Ensemble, a group dedicated to the performance and recording of electro-acoustic music. Their 2010 debut recording, "The Salt Lake Electric Ensemble Perform Terry Riley’s "In C," received praise from critics throughout North America and Europe. He holds a bachelor of music degree from the University of Utah and a master’s degree in music technology from IUPUI in Indianapolis.

The NOVA Chamber Music Series has established itself as an organization that regularly supports the creation of new music written by the very best composers living and working in Utah. Sunday’s concert was no exception. The concert featured two works from University of Utah music professor John Costa alongside two from Arnold Schoenberg. These local collaborations are invaluable. By connecting the area’s top composers, performers, and arts and education institutions, NOVA is fostering growth within the local art music scene.

The afternoon’s concert was a smashing success. Costa’s “Whiplash,” a three movement piece for violin and piano opened the concert in its world premiere. Immediately a crackling energy was established. Costa writes that “the music is direct in a rock-driven sense, capturing its essence but not resorting to imitation.” Some of that captured essence might lie in the driving rhythms and big, powerful piano chords often heard in the same register as those typically produced by the electric guitar in the rock genre. Violinist Hasse Borup and pianist Jason Hardink brought the necessary drive and forcefulness into their performances of the piece, but never at the expense of precision or expressive playing.

The three other works on the program were all set to poems. The two Schoenberg pieces provided a nice contrast between the composer’s late romantic style, often compared to Wagner or Mahler, and his later innovations in 12 tone writing. Even if Schoenberg had never conceived of the act of abolishing a tonal center in his music he would still likely be remembered for the incredible quality of the tonal music he wrote in his youth. The “2 Gesange,” taken from his op. 1, is a good example. Written while the composer was still in his 20s, the work shows a strong command of the harmonic language of the highly chromatic romanticism of the time. Written for bass-baritone and piano, Hardink and guest artist Timothy Jones sounded lush and colorful. In the “Ode to Napoleon Buonaparte” Schoenberg’s mature style dominates. Written for piano with string quartet, the performance featured Jones reciting the Lord Byron poem of the same title. Jones, Hardink, and Borup were joined by violinist Hanah Stuart, violist Joel Gibbs, and cellist Noriko Kishi. Together, they delivered an intense and spirited reading of Schoenberg’s score.

Costa’s “Refuge” closed the concert. Set to five excerpts from Terry Tempest Williams’ “Refuge — An Unnatural History of Family and Place,” the work finds Costa exploring Williams’ themes from a musical perspective. The text deals with issues of death within families, the terrible disease of cancer, and denial before breaking through to a brighter outlook toward a new horizon. Costa’s score very gracefully reinforced this emotional text. All of the afternoon’s performers took part in this final piece, closing the concert with a moment of transcendence, made possible by the fusion of music and text performed with passion and a high level of proficiency.

NOVA should be commended for producing another wonderful season of concerts. Their programming has been a fascinating blend of time tested chamber music classics with new and exciting works by some of the most interesting composers of our time. Next season looks just as promising.

Philip Glass is among America’s most famous and prolific composers, living or not. Early in his career, he composed in a strict minimalist style after being influenced by composers like Terry Riley and Steve Reich. In early works like Music With Changing Parts and Music in 12 Parts Glass relied heavily on repetitive structures with changes often coming in the form of augmentation and/or diminution of those structures, usually not adhering to common meters. While these and other early works were important in Glass’ development and in the development of the minimalist style, it wasn’t until Glass began to embrace common meters that his signature and popular style was forged. 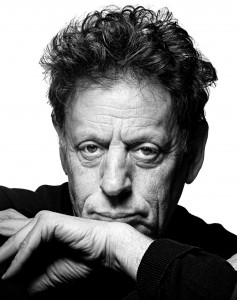 Glass first rose to prominence with his opera Einstein on the Beach, and has regularly composed for the opera ever since. His operas often focus on the biographies of notable historical figures including Gandhi, Galileo and Kepler. The biographical focus of Westminster College’s production of Glass’ The Photographer is a less known historical figure of tremendous importance named Eadweard Muybridge. It’s often argued that Muybridge’s experiments with the rapid capturing of many photos in sequence was the first cinematic technology, and led to the moving picture and modern day cinema.

Westminster College has been providing quality chamber music concerts for years, usually featuring distinguished faculty performers and other professionals from the community. The scale of the production of The Photographer required a new level of ambition for the college. Musically, it requires a chamber orchestra and choir, however the work is a truly multimedia production because it also requires light projections of Muybridge’s work during the entire second act and a dance performance during the third. To realize the ambitious score and the multimedia elements the production director, Michael Chipman, assembled a collection of students and faculty from the college representing a variety of academic disciplines.

Considering the ambitious nature of the production and the inclusion of student performers, the performance was a smashing success. The projection and dance elements worked especially well thanks to projectionist Talus Baddley (a student) and choreographer Ashley Mott and her ensemble of talented dancers. Aside from a couple of minor synchronization problems within the ensemble, the music was also well performed. Glass’ music is deceptively difficult to perform, especially when ensemble works like this one reach into the higher tempos. The kaleidoscopic aural effects of Glass’ musical patterns require machine-like accuracy with the pulse in order for the full effect to be heard. Conductor Brandon Derfler did an admirable job of keeping the ensemble balanced and together, though sometimes I was left wanting more from the biggest crescendos and a little extra zip on the fastest tempos. Still, this was an admirable reading of a challenging score and a terrific staging of an important contemporary multimedia opera.