Monday night at Westminster College, on their “night off,” three Utah Symphony musicians — David Porter, Yuki MacQueen and Alex Martin — gave a scintillating performance of the monumental set of six sonatas for unaccompanied violin by the legendary virtuoso, Eugène Ysaÿe. As a sequel of sorts to a performance a few years ago of the six Bach sonatas, it demonstrated once again the admirable level of dedication and achievement of the symphony musicians. 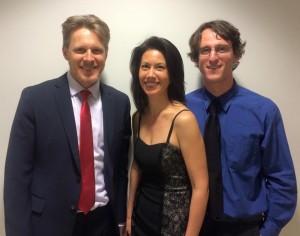 It was gratifying to see a large contingent of Utah Symphony members past and present in the audience to support their colleagues on stage. Former board chairperson, Pat Richards, was also in attendance. If members of the symphony management and conducting staff had been there, they, too, would have been able to relish this rare treat of a program carried off so exceptionally well.

Ysaÿe’s compositions were written at a crossroads of music history. Clearly he was influenced by older 19th century romantic contemporaries like pianist/composer Franz Lizst and the violinist/composers Henri Wieniawski and Henri Vieuxtemps. As the greatest virtuoso of his generation, Ysaÿe included every pyrotechnic in the book: Harmonics, runs of fingered octaves and tenths, simultaneous ponticello tremolo with left hand pizzicato. (If this doesn’t mean anything to the lay reader, believe me, it’s hard!) But Ysaÿe was also a learned musician who paid due homage to Bach and baroque forms. Within the sonatas we hear fugues, themes and variations, passacaglias and other period dances. At the same time, Ysaÿe was clearly looking ahead to the incoming impressionistic style of Debussy and the French school.

However, there’s something unique and personal in Ysaÿe’s harmonic language, in that in large part it is derived from violin technique itself. As devilishly difficult as his sonatas are to play, they “fit” within the idiomatic finger patterns of the violinist’s left hand, and in combination with creative use of the violin’s open strings, create intervallic and harmonic progressions that are distinct from any other composer.

In the first movement of the Sonata No. 2, called “Obsession,” Ysaÿe juxtaposes two wildly contrasting themes: One is a quote from the effervescent opening of the Preludio of Bach’s Partita in E Major. The other is the ancient liturgical chant, the Dies Irae, or Day of Wrath. In other words, heaven versus hell. Likewise, it’s heaven to listen to, but it’s hell to play! The three violinists nevertheless pulled it all off with exceptional élan, exhibiting technical security and musical imagination, and displaying a mastery that does great credit to the musicians of the Utah Symphony.