The great paradox that musicians have in preparing repertoire for performance is that the result of all the untold hours of painstaking rehearsal is to make the music sound spontaneous. Decisions about balance, rhythm, articulation, ensemble, intonation and style, consciously made on virtually every note of a piece, all together create the planned spontaneity we refer to as “interpretation.” The number of permutations among these variables are infinite. When it’s a string quartet…well, what’s infinite times four?

When a piece is under-interpreted, the result is something bland and uninspiring. Musical wallpaper. Sometimes proponents of such playing defend their (lack of) interpretation by claiming to adhere to exactly what was written on the page, forgetting that most of any page of music is white – the spaces between the notes where the music is made. On the other hand, music that is over-interpreted sounds artificial – a thick layer of over-spiced gravy that coagulates over what would otherwise be a tasty dish. 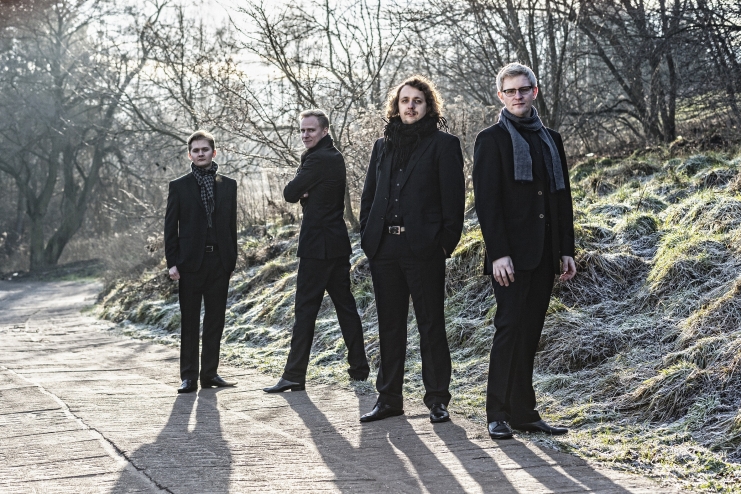 Wednesday night, at Libby Gardner Concert Hall, the Meccore Quartet found just the right balance. It was one of the most enjoyable string quartet experiences I’ve had in a long time. Their Mozart (No. 21 in D major, K. 575) was light but had character, flexibility, and clarity. Their musical gestures were explicit but sensitive throughout. I jotted down one word in my notes for their timing of the exotic harmonic modulations in the development of the first movement: “Wow!”  Their sense of Mozart’s uncanny ability to set up musical expectations and then either satisfy them or, more often than not, deflect them, was right on the money every time, yet they never whacked the listener over the head with it. Rather, their timing was organically conceived, creating the impression of “this is the way the music is supposed to go,” that made listening to it an absorbing pleasure.

For the Szymanowski Quartet No. 1 the two violinists switched parts, a practice that is becoming more common these days, as it is in symphony orchestras. I suppose the world’s growing embrace of democracy is filtering down to classical music (but don’t tell that to conductors). Another recent practice the Meccore followed is to play standing, except for the cellist, who sat on a podium to bring him up to the others’ level. I’m generally neutral on both of those recent practices. If the musicians aren’t great to begin with it comes across as shtick. The Meccore Quartet, fortunately, are great musicians, and made their decision to stand pay off. The communication among the group was constant and unified, and when, on occasion, one of the inner voices had the lead line, he could literally step forward and make himself heard.

Though Szymanowski’s music has never gathered the huge following as some of his contemporaries, like Bartók or Debussy, his music is often engaging and occasionally compelling. In his quartet, there were echoes of Vaughan Williams, Janacek, Bartók, Shostakovich and even Mendelssohn, yet overall the impression was of a fresh, individual voice. The Meccore effectively communicated Szymanowski’s range of musical colors, from the mysterious and ephemeral to the playful and sardonic.

Most quartets can perform the Tchaikovsky D Major Quartet in their sleep. The trick is to not sound like they are. In that, the Meccore was again successful. From the transparency of their sound in the very opening created by judicious use of vibrato and a flautando bow stroke, to the rough-and-tumble coda to close the piece, their performance was in the moment and continuously engaging. The famous, tear-inducing second movement, Andante cantabile, led by cellist Karol Marianowski, was lovingly done. Afterwards, the person sitting next to me suggested the piece might have been programmed especially for Valentine’s Day. I don’t know whether that was the case, but I’d trade a dozen roses for such a wonderful concert any day.